Van Province is in the Eastern Anatolia Region between the east latitudes of 42º40’ and 44º 30’ and the north longitudes of 37º 43’ and 39º 26’. The territory of the province covers 2.5% of the country with an area of ​​19.069 km². The province is geographically surrounded by Ağrı in the north, Lake Van and Bitlis in the west, Siirt and Hakkâri in the south and the Iran in the east¹.

​​Of the province area, 53.4% is covered by mountains, 32.9% is covered by plateaus and13.7% is covered with plains. Elevations in Van Basin range between 1.650–2.600m. There are Kavuşşahap Mountains in the south of Lake Van and Erek Mountain continues in mountain range in the east. The heights of Pir Rashit, Isa Bey, Erk, Sudis,Baset, Ispiriz, Hirabit and Kars Mountains are among the mountain ranges that peak around Iran territory and slope down towards the lake. Various mountains in the south and east of Lake Van was exposed to tectonic on dulations and cracks in various geological periods, causing the ancient layers to crop out to the surface². 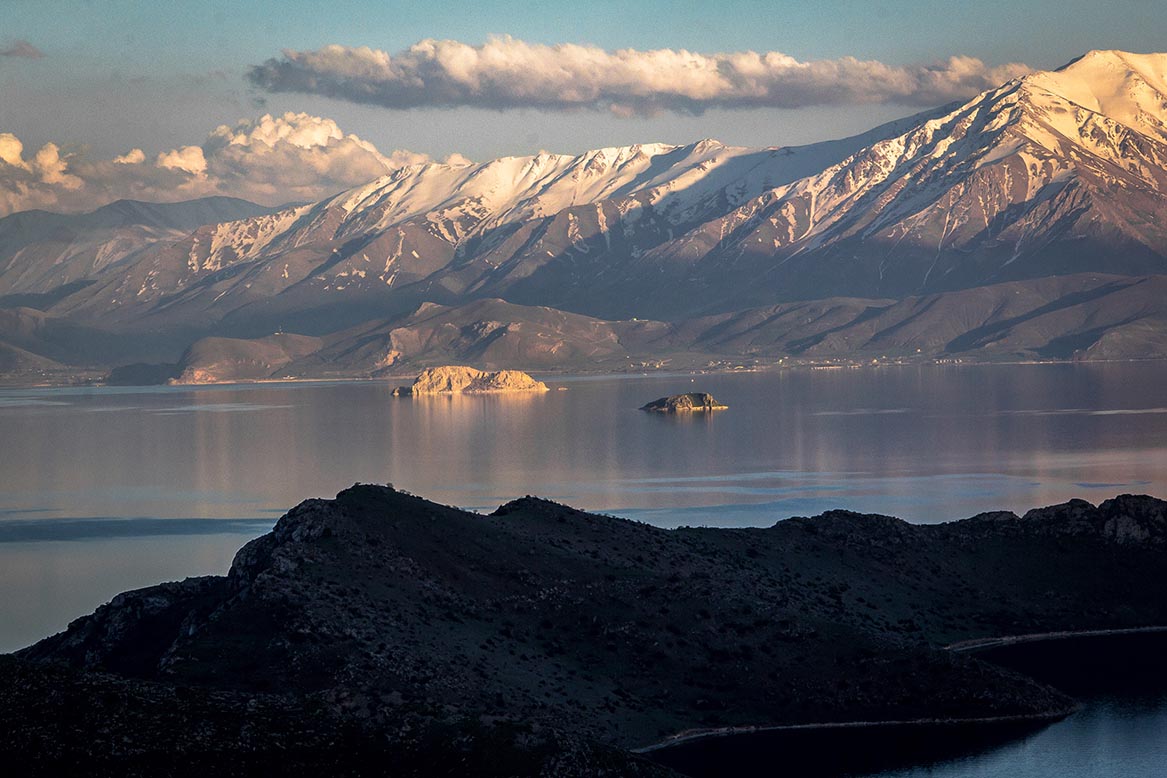 As a result of the eruption of Mount Nemrut and the lava spreading to form a wide set, the Muş-Van pits were filled and divided into two areas. Water accumulated in the Van Basin which lost its connection to Murat River and formed Lake Van. Van, Erciş, Arin, Adilcevaz and Ahlat plains are located around Lake Van. There are lakes of various sizes around Lake Van. Aygır Lake and Nemrut Lake are the crater lakes with freshwater. Arın Lake was separated from Lake Van by an alluvion wall. Erçek Lake, which is located in the east of Lake Van, was formed as a result of the tectonic movement.

Van Lake roughly resembles a right-angled triangle. The hypotenuse of the triangle corresponds to the widest part of the lake. From its southeast to the north east it is located approximately between the geographical latitudes 38º - 15’ and 38º– 58’. Lake Van is located between the provinces of Van and Bitlis⁴.

The surface area of ​​the lake is 3,713 km² and the its lake altitude is 1647 m from sea-level. Lake Van is supplied by many rivers around it. The significant rivers are; Zilan Stream, Bend-i Mahi Stream, Hosap Stream, Karasu Stream, DeliStream, Arpak Stream and Memedik Stream⁵.

The settlements around the lake have a continental climate. The average temperature varies according to latitude and altitude. The average annual temperature is 8.8°C inVan and in 10°C Ahlat, Gevaş and Adilcevaz.7

Although Lake Van Basin has a rich vegetation, the mountains of the region are without trees in general. Steppe vegetation is prominent in the region⁸.