ARCHITECTURE
Parts of the Church

Parts of the Church

1 The Church of the Holy Cross
2 The Chapel
3 The Portico
4 The Community Hall
5 The Bell Tower
6 Services Building
7 The Chapel of St. Stephen
8 Cemetery

1 The Church of the Holy Cross

The Holy Cross Church has a four-leaf clover shaped cross plan (tetraconchos) with a central dome. Its exterior dimensions are 16.00m. x 12.50m. When the facades are examined, it is seen that the cross arms on the east and west sides of the structure are built deeper. With the addition of the community hall to the western cross arm in 1763, where the main entrance used to be, this side was covered up to the height of the plastic ornaments. The facade livens up with two 1.10m wide, inward-stepped niches with round arches. There are two rectangular windows with round arches in the middle of the niches. The lower window is aligned with the ornamental border with religious themes and the upper one is below the ornamental border with vines in the background. The upper part of the western cross arm ends with a triangular pediment. There are two rectangular windows on the northern and southern surfaces as well. The entrance door, which is inside the community hall today, is 2.00 m high and 1.36 m wide.

In the southern side of the building is the king’s court. The exterior stairway leading to the gallery was cancelled at the end of the 18th century, when the bell tower was added. The southern wall was built in five facades on the outside. There is a door to the king’s court above the lower entrance which his 1.35m wide and 2.00m high. There are three window openings, one above this door and two on the side walls. These rectangular windows are round-arched.

Eastern side, which has the same structure as the western side, has a straight façade of 9.00m from the outside, including the past ophorion rooms. This straight wall livens up with two vertical 1.10m wide niches, on both sides of the apse. These niches are inward-stepped and round-arched, just like the ones on the western façade. In the middle of the apse and in alignment with the religious-them edornaments, there is a rectangular, round-arched window opening. Two smaller windows are made just below the botanical ornaments. The window on the south is round arched, the one in the north is straight.

In the north of the north niche, there is another tiny grated window. The upper part of the façade ends with a triangular pediment. The northern side of the structure, which is built in five façades from the exterior as the southern façade, is covered up to the ornamental border due to the chapel added in front of the entrance door on an unknown date. The western side of the northern façade can be traced down to the ground level. In alignment with the main ornamental border, there is a rectangular, round-arched window. The façade is ended with a triangular pediment at the top. The arms of the cross on the four façades that form extensions from the central square hall are covered with a double chamfered roof. The sixteen-sided dome trimmer is covered with a pyramidal cone. Between the eight windows placed on the trimmer, there are also six niches in the form of windows. The windows on the trimmer are rectangular with round arches. The tip of the pyramidal cone is slightly damaged. It is seen in the old narrations that there used to be a stone cross on the top of the conical roof. In the inscription on the southern façade, it is stated that the dome collapsed and was repaired; although it is not stated when and by whom the restoration was done, it is a known possibility that it was repaired by Stephanos III in the end of the13th century.

The church is surrounded by a cemetery in the north and southeast. The 0.85m x 1.10m thick walls of the church are mounted on a two-stepped platform. Building walls are laid with red tuff face stones. According to a rumour, the stones used in the building were brought from the province of Aghznikh (a region in the north east of today’s Diyarbakır). The main outer walls of the building are constructed with masonry wall technique, using face stone.  Stone material is used in the conical roof of the structure. Such construction method is specific to this region. Aghtamar Church attracts attention for the richness of its exterior reliefs that surround the structure at various levels. Moreover, the interior of the structure is adorned with frescoes.

The Chapel of Catholicos I Zacharias is located at the northeast of the church. The chapel has a rectangular plan with dimensions of  6.60m x 4.80m. This structure which was built independently from the church, was later connected to the church with a barrel-vaulted hall of 2.50m x 1.15m.
‍
The western façade of the chapel is covered up to the roof level by a structure (the community hall) that was added in the later periods on an unknown date. This façade has a window opening to the apse.
‍
The northern and the eastern façades of the building are covered almost up to the roof level with soil. The top of the chapel is covered with a double slope roof built from the outside. The entry in the chapel is through a 0.95m wide door on the west side.  The door with a pointed-arch pediment is framed with two rows of wooden moulding. The interior is 3.15m x 2.80m and it is covered with barrel vault. The apse on the east with a depth of 2.10m, is 0.80m high from the ground. In the very middle of the apse half circle, there is a grated window with interior dimensions of 0.60 x 0.30m.
‍
The main outer walls of the structure are about 1.00m thick and is constructed within filling masonry technique. Brown smooth face stones are used in the exterior façades and the vaults of the interior. Pitch-faced stones are used for the lower parts of the apse and the interior walls, whereas bricks are used in the middle part of the apse. The facing stones of the upper cover of the chapel fell off. Filling layer made of rubble stones is visible. There are ornamentation elements in the structure.

The structure which was connected to the northern cross arm of the church has a rectangular plan in 7.65m x 2.60m dimensions and its top cover is in the form of a flat roof. The southern façade of the structure is formed by the northern crossarm of the church and the north-eastern corner niche. The structure is connected with a flat roof to the north-eastern niche that forms a cove. The eastern façade is connected to the Chapel of I. Zachari as, and the northern façade is sloped up from the ground to the east. The western façade, which has a round-arched window opening is aligned with the church floor.
‍
The entrance inside is through the northern cross arm. The rectangular hall which is 6.15m long in east-west direction is divided into two by two arches that stand on wall piers. On the north wall there are four rectangular niches. The passage to the additional halls where the northeast niche of the church is located is through a 2.00m long, pointed-arched opening. The interior is covered with low barrel vault. The main outer walls of the structure are 1.00m thick. The walls are built by infilled masonry technique. Pitch-faced stone sand rubble stones are used as building materials. There are no ornamentation elements in the structure.

The community hall, which was connected to the western cross arm of the church has a square plan of an exterior size of 12.70m x 12.30 m.
‍
There are three grated windows on the western façade of the structure where the entrance door is located. The entrance door is 0.96m wide and 1.50m high. The door ends with the 1.00m high door pediment.
‍
The base of the southern side of the building is raised up to the level of the windows, asa result of the collapse of the monastery structures. There are three grated windows on the upper axis of this façade. There is another entrance with a width of 0.70m under the window in the middle.
‍
However, this door cannot be noticed from afar due to the rise on the floor. The eastern façade of the community hall is connected to the eastern and northern walls of the western cross arm of the church with a 0.90m thick wall. There are three grated windows on the northern façade of the structure. The western window is smaller than the other windows. The outside cover of the structure is in the form of a flat roof. The interior has a central plan, where four piers and eight wall piers carry the top cover. The square hall is divided into 9sections with square piers of 0.75m x 0.75m. The passage to the ribbed and low dome with a diameter of 3.55 standing on the piers, is by pendentives. In the interior, the whole cover system except the dome is cross vault. The ones in the east and the west are 1.00m narrower than those in the centre. Entrance to the church is through the east door. The base of the community hall is built1.20m lower than the church floor, so entry to the church is through stairs of four steps.
‍
The main outer walls of the structure are 0.90m x 1.10m thick. It is seen that face stones and rubble stones are irregularly used on the main outer walls. Additionally, grave stone is used as the material on the southern wall. From the main outer walls, it is understood that the structure was renovated. On the windows, niches and piers, as well as on the entrance door of the structure, smooth face stones are used. Ornaments are seen only over the western entrance door. On the pediment of the door, over the seven lines of inscription, there is a decorative cross embossment decorated with rosette and six-pointed star motifs.There are rosette motifs on the surfaces of the 0.30m long springer, on which the mouldings framing the pediment stand.
‍
There is an inscription arranged in 5 lines under the cross motif on the southern door pediment of the structure.

The bell tower added to the southern cross arm of the church is arranged in three floor son four piers of 0.90m x 1.20m. The first floor is covered with cross vault that stand on pointed arches that connect the piers to each other. The second floor is separated with a moulding that extends on the surface from the first floor. The pointed arches resting on the piers in the corners carry an open-top moulding. Transitions to the moulding are by pendentives. The top of the archeson three façades except the north are ended with triangular pediments. The top of the pediments is covered with stone-coated hipped roof. On the third floor, there is the pyramidal-coned bell tower, placed over six columns. This section is built smaller than the other two floors.
‍
A smooth face stone and rubble stone are used together on the outer and inner parts of the bell tower. White limestone and brown volcanic tuff stone are used in various colours on the bell tower. There are arrays of muqarnas starting from the archlegs and going all the way outside on the piers of the ground floor of the structure. There is also a sundial motif on the second floor of the bell tower. 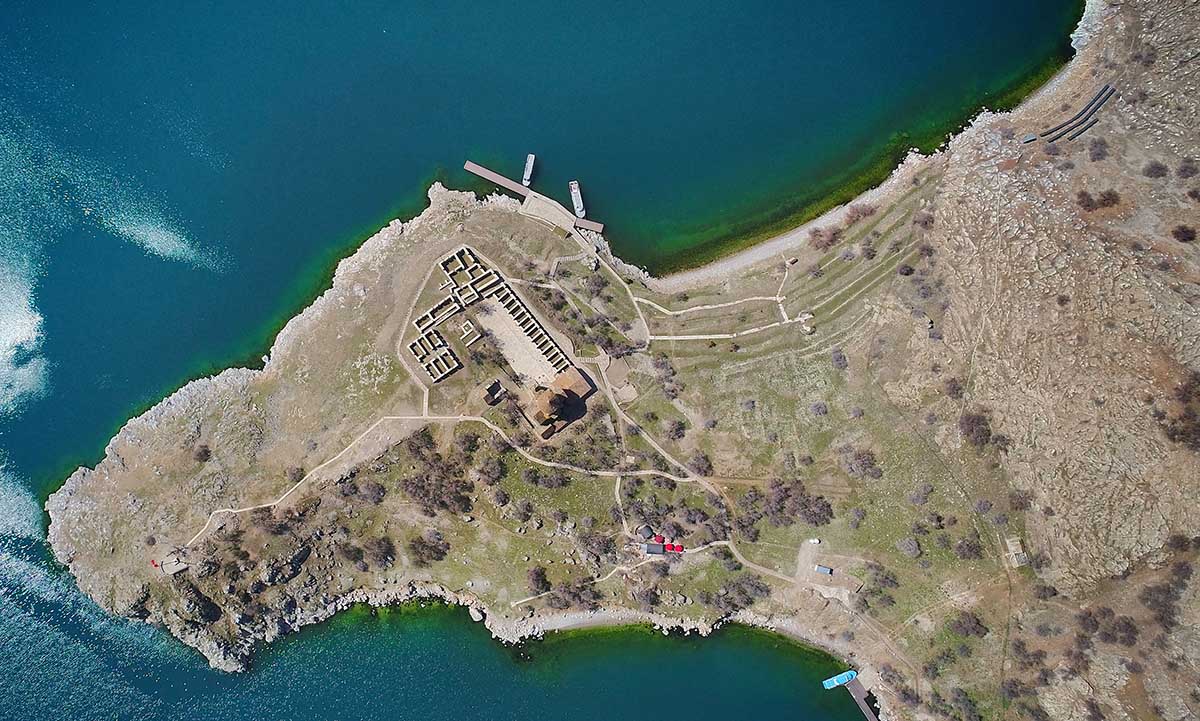 7 The Chapel of St. Stephen 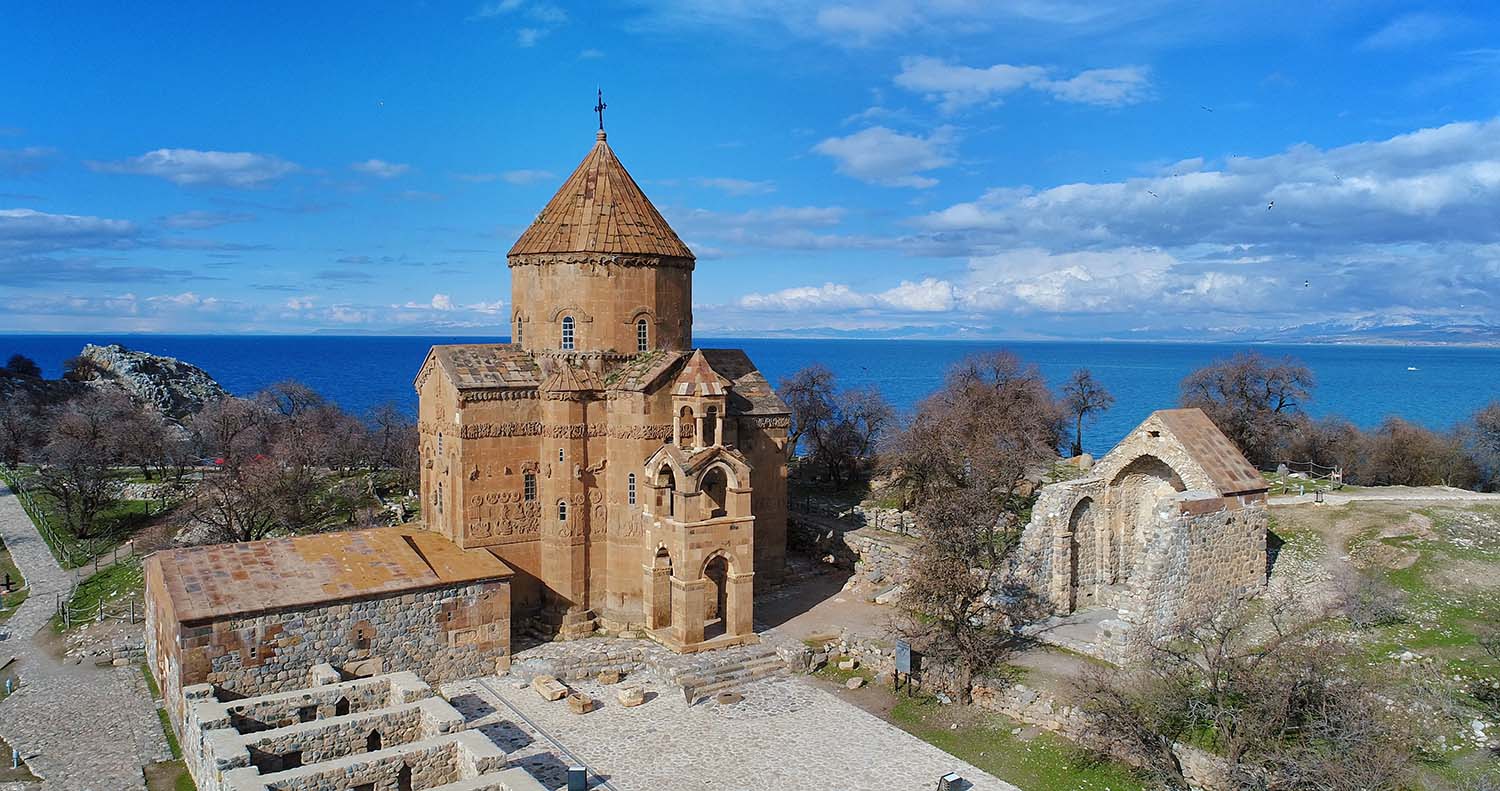 The Chapel of St. Stephen can be seen on the right side of the church. 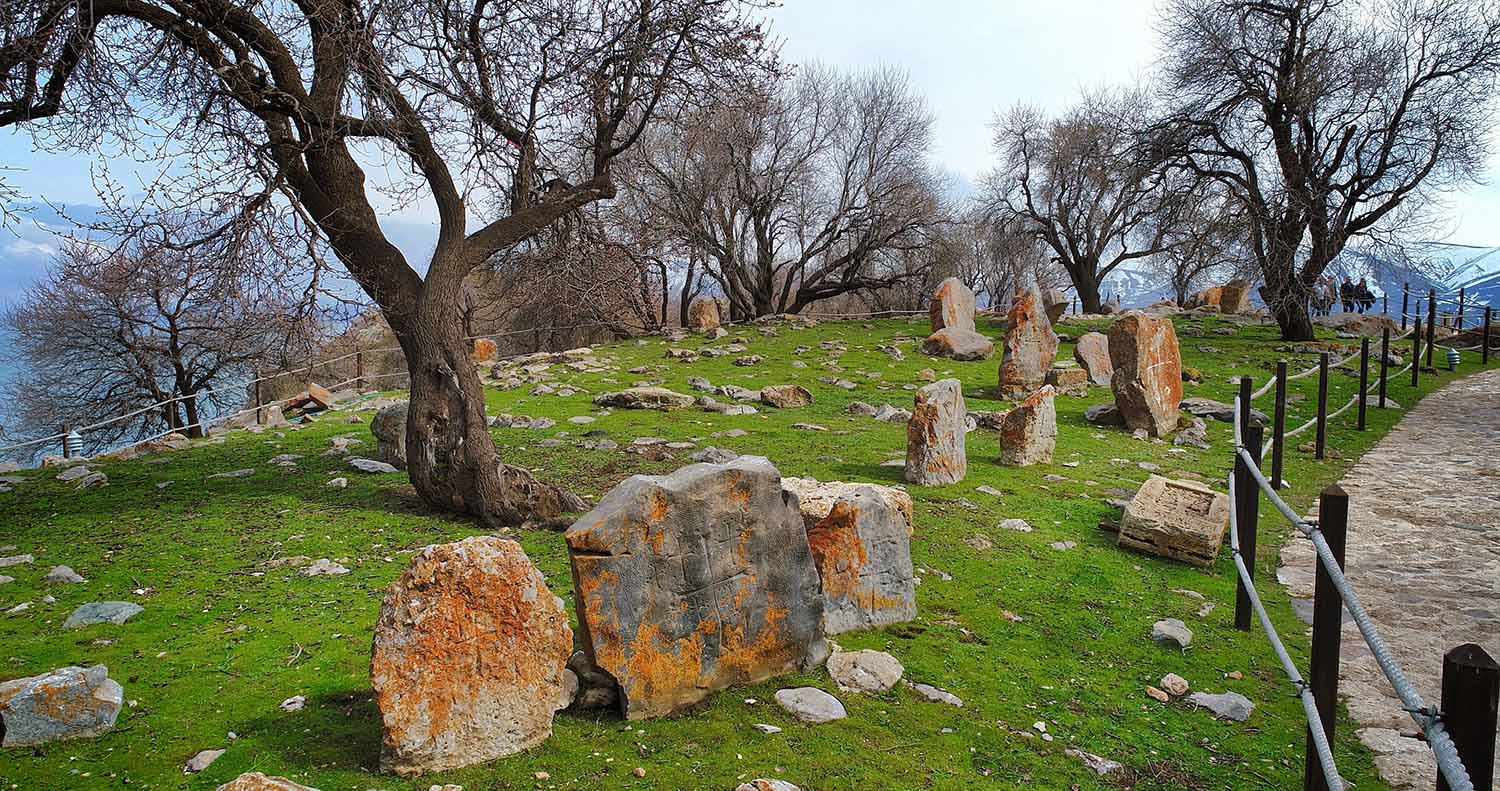