The Kingdom of Vaspurakan

Aghtamar Church of the Holy Cross

Aghtamar City and  the Kingdom of Vaspurakan

In the Middle Ages, Van Region and the whole Eastern Anatolia was mostly under the control of powerful families, who were mainly influential on Armenian lineages.Over time, two of these families stood out. One of these was the Bagratuni Family from the city of Ani and the other was the Artzurini family who dominate dover the Rushtunis. In the beginning of the Middle Ages, Lake Van basin, which was named Vaspurakan belonged to the Rushtunis. The word Vaspurakan, is a name used to refer to the noblest class in the Sassanids. Ardzruni family took over and settled in a part of the Rushtuni land in the south of Lake Van; spread to all Vaspurakan land from Lake Urmiye in the east of Lake Van, to Mount Ararat in the north, and Zap River in the south.
‍
It is known that in the beginning of the Middle Ages, at the end of the struggle for domination on Van region between the Roman Empire, the Parthian and the Sassanid States, Eastern Rome was victorious and that the Eastern Roman armies, who would be named as Byzantium in the 4th century, took over Van.However, it is indicated that during this period of struggle, the armies of Islam came to the region in 641, during the leadership of Umar, as a third power over these lands. The region was dominated and became an emirate during the time of the Umayyad, Dvin being the centre. Governors sent for the administration of this place mostly dealt with tax affairs, and the internal affairs of the province was administered by Armenian nobles. Abbasids governed the region under the name of Armenia through these Armenian nobles whom they appointed as governors.
‍
During the Abbasid period, when the Islamic sovereignty was fully established, many rebellions broke out in the region due to the influence of Arabic governors. Turkish rulers were assigned to supress these rebellions. In 851, the disturbances provoked by Vaspurakan Prince Ashot in Van region was suppressed by the intervention of aTurkish commander, Boga Al-Kebir, and peace was restored. To prevent these Armenian rebellions and to overthrow the influence of the Byzantine Empire on Armenians,Ali B. Yahya, who was appointed as the governor of Armenia in year 862, gave Ashod B. Simbad of the Bagratuni family, the title of “Ishkan of Ishkans”.
‍
During there in of Muhammad al-Afshin, who was appointed as the governor of Azerbaijan in890 and who is the founder of the Turkish reign called Sacogullari in the region, Simbat bin Ashot was in the Van region and was paying taxes to theAbbasids. When Simbad made an agreement with the Byzantine Emperor Leaon I Vagainst the Abbasids, Muhammad Al-Afshin and the Baratuni Dynasty grow away from each other. As a result of this, Al-Afshin approached the Ardzruni Dynastyand defeated the Bagratuni Dynasty.
‍
Lake Vanbasin was shared between the sons of the Vaspurakan Prince Grigor Derenik from the Arzurini dynasty, Ashot Sargis, Hacik Gagik and Gurgen, after his death.Afshin took advantage of these commotions and subjected all three sons to himself.
‍
In 908, Abbasid Caliph Muqtadir crowned the Ardzruni prince Gagik, who lived in the Vaspurakan region in the southeast of Lake Van, and granted him the title of kingdom. The word Vaspurakan means “the highest, the loblest class” in Sassanid language. Gevaş, which was formerly named Vostan became the centre. The principality was free in its internal affairs and dependent on the Abbasids in its foreign affairs.
‍
During the peacetime after the Abbasid Caliph granted the title of kingdom to Gagik, the two brothers, Gagik and Gourgen began their large-scale constructions in Vostanand Aghtamar.
‍
The Armenian historian Thomas Ardzuni, who is from the same lineage as Prince Gagik, mentions of King Gagik as a hero. While he emphasises that he is a pacifist, compassionate and art-loving ruler, he tells about the great wealth of the kingdom during his reign. Again, according to Ardzuni, Gagik’s favourite buildings were the church, the palace, the monastery, the town, the marketplace and the port in Aghtamar Island and they were all designed by Gagik himself. Vaspurakan Kingdom, which was centred in Vostan, built many works ofart around Lake Van in this period. The construction of the Aghtamar Church of the Holy Cross began in year 915, seven years after Gagik started to reign and was completed in year 921.
‍
The Kingdom of Vaspurakan started to weaken after Gagik’s death in 937. It ceased to be a kingdom with an agreement between the Byzantine King Basil II and King Senekerim in 1021 and became one of the eastern provinces of the ByzantineEmpire. 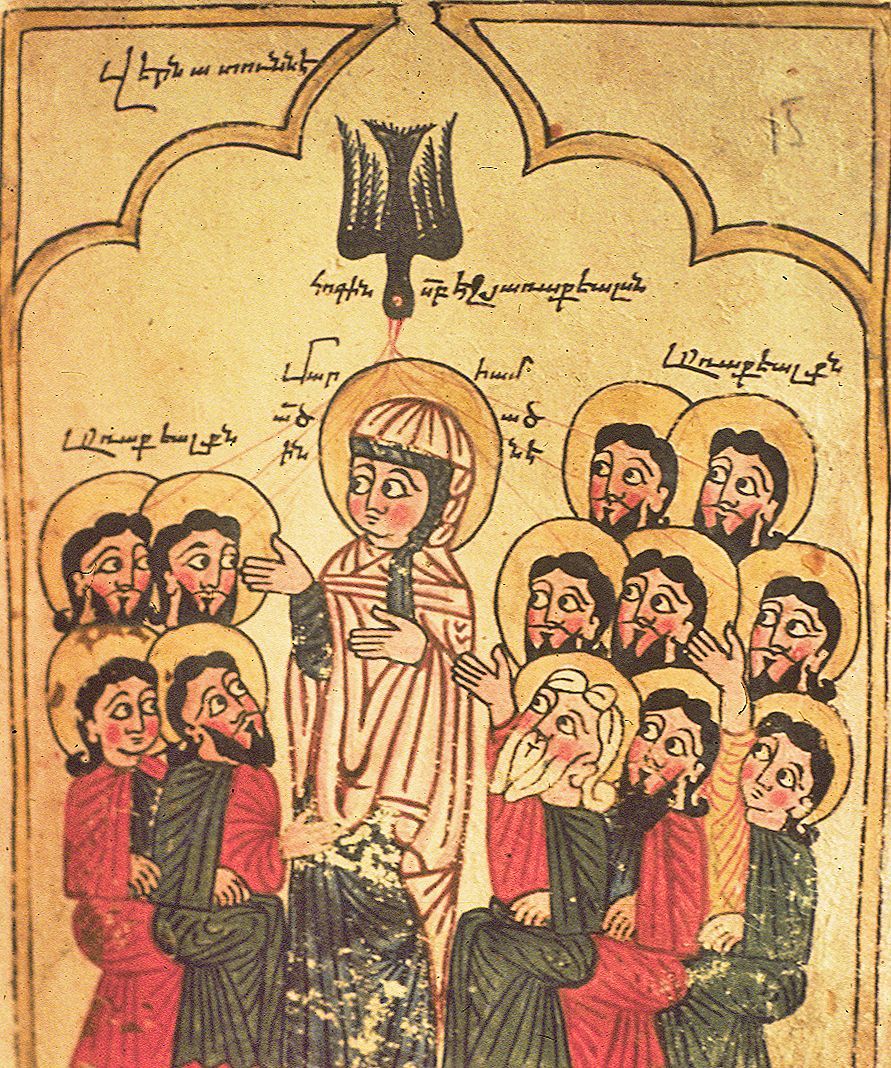 The work of Dzerun, a miniature artist, depicting the monks in Aghtamar, in 1391.

The palace, for which King Gagik also participated in the drafting works, was built on are rectangular foundation. It had a spectacular interior design and a gold-plated throne under gold bronze domes. This magnificent palace is described in history with the following words: “The palace that resembles a mass of a mixture of copper and lead with its three-feet-thick walls made of lime mortar and stone blocks, seems as if it rises from foundation up to the roof itself, with no bearing walls; this structure is indeed a miracle, it’s beyond imagination.Arched niches, corners, unbelievable passages are dazzling; golden ornaments shine brightly on the domes that are as steady as the skies,: those who would like to watch these domes must take off their hats as if paying their respects to a ruler; only then they can contemplate on this unique riot of colours until their necks get stiff. The architecture of the palace is so amazing and extraordinary that any educated person examining even one single room for hours, would leave the palace without realising what he saw. The golden throne that the prince sits with all his glory is surrounded by palace boys with sparkling eyes, arrays of musicians and groups of glamorous girls. The soldiers waiting with their swords unsheathed, warriors ready to fight anytime, lion sand other wild animals here and there, birds adorned with precious stones are also remarkable. If it is required to tell about everything there, one by one, both the narrator and the listener would be exhausted. The doors of this palace of beauty beyond imagination, are extremely elegant and finely embroidered as well; when these two-winged doors are open, a light breeze fills the room; all doors match with each other as if they derived from a single sample.”
‍
This magnificent structure unfortunately failed to survive to this day; there is not even a single trace of left of it. Only the church that was built in the vicinity of the palace managed to survive. Architect Manuel, according toThomas Ardzuni: “he was such a man that with his knowledge and talent, hemanaged to make the church an architectural masterpiece”.
‍
Indeed, this church, which is one of the most distinguished and significant works of the medieval Armenian art has survived until today; King Gagik and Monk Manuel have left us an invaluable historical and cultural heritage. 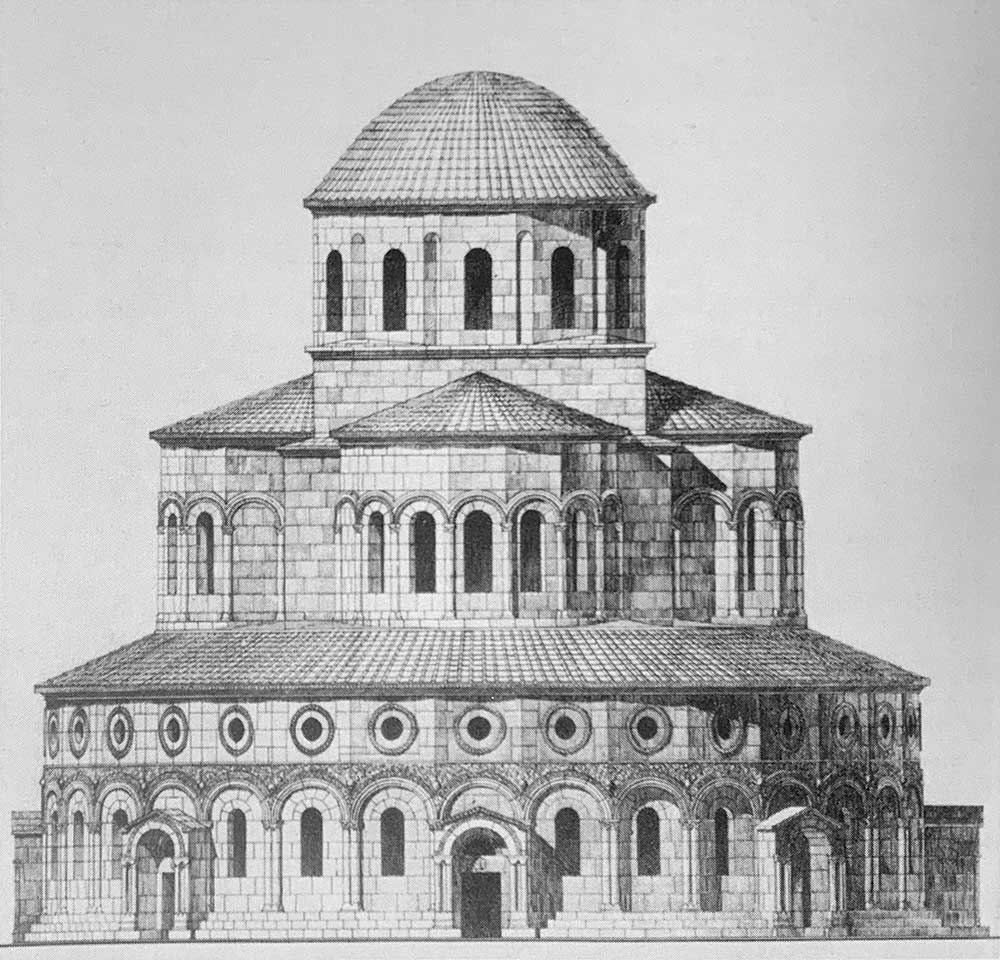 Medieval Armenian Palaces that rise like hillscould only survive as ruins today. 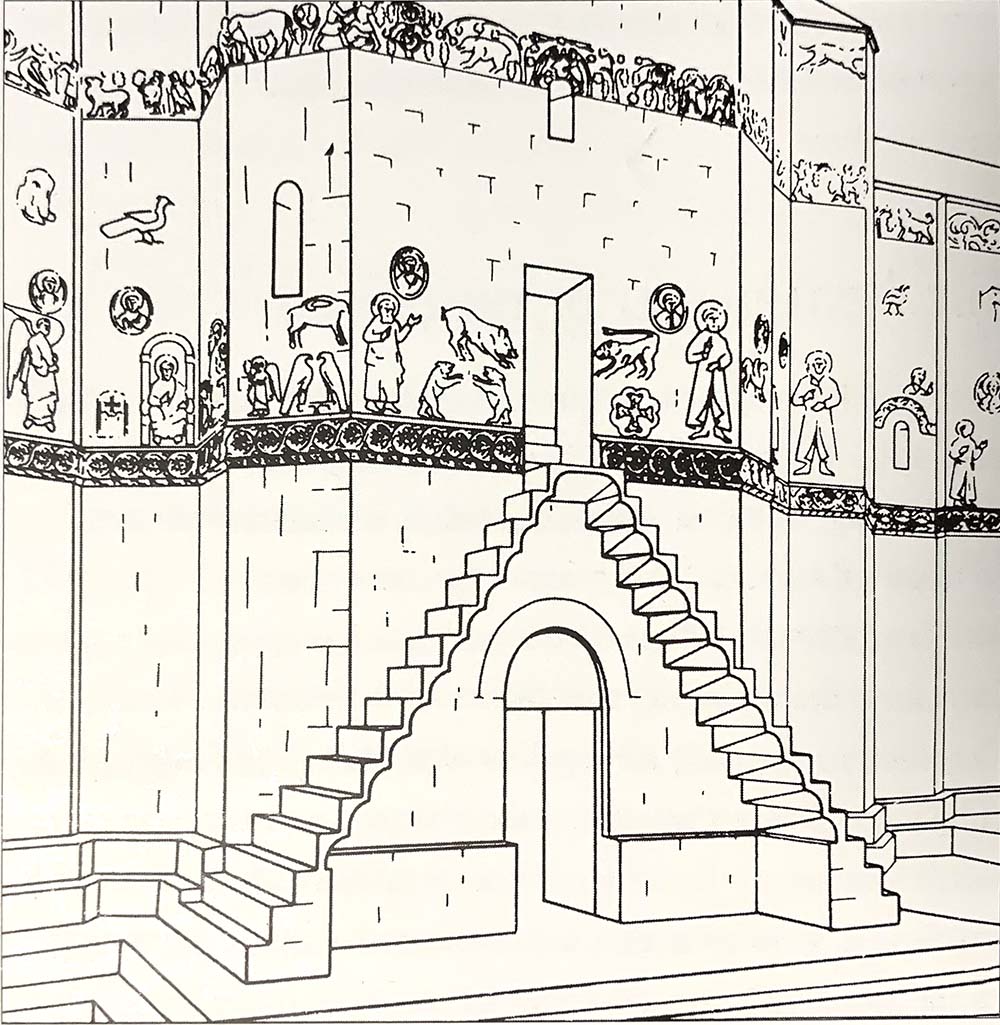 It is believed that the palace was located infront of the southern entrance of the church. However, as it could not reachthe present day, there are not many studies conducted on it.

History of Aghtamar Church of the Holy Cross

Located on the southeast of Aghtamar Island, the Church of the Holy Cross was built from915 to 921 by the architect Manuel as the church of a palace complex, upon the order of Hacik Gagik Ardzruni I, who became the King of Vaspurakan in 908. In his book, describing the history of the Ardzruni Dynasty, Thomas Ardzruni explains in detail that the palaces, churches and walls of Aghtamar Island that Gagik himself designed and supervised during construction, were completed only in five years.
‍
Vaspurakan Kingdom was abolished by Byzantine Emperor Basil II in 1021-1022 and the last king Senekerim was forced to emigrate to Sivas and partly to Kayseri with40,000 Armenians. With the annexation of the Vaspurakan Kingdom (12 castles,4400 villages, 115 monasteries), the Church of the Holy Cross on Aghtamar Island ceased to be a palace church and was converted into a monastery.
‍
The main structure of the church, which consists of several building sections, was built by Vasagurakan King Gagik I, between years 915-921. The building sections were designed by the king himself and the implementation was carried out by monk and architect Manuel.
‍
When the Vaspurakan Kingdom was abolished in 1021, various sections were added to the main structure in 1113. From this date until 1895 it became the centre of theArmenian Patriarchate in the region. At the end of the 12th century, several new building sections were added to the building which became a building complex. The Armenian monastery dedicated to the Holy Cross subsisted after the 16th century, when there was no civil settlement on the island. Until the end of the 19th century, around three hundred monks lived in the monastery, which was abandoned after the incidents of 1895 and 1915. When the island was abandoned in 1918, all the monastery buildings were completely demolished, and the church and other building parts were damaged.
‍
The restoration work of the Ministry of Culture and Tourism started in 2005. Restoration of the main structure of the Aghtamar Church, the community hall section to the west of the church, the chapels located to the southeast and northeast of the church were completed. Scientific excavations conducted to reveal the complementary parts of the main structure located in south of the church were completed between 24.03.2006 and 25.08.2006. Excavations covered an area of​​approximately 3,435 m2 and revealed the section with cell room saligned around a courtyard, the service section, the cistern and the clergy school to the south of the church.
‍
‍

¹A gavit or zhamatun is adjacent to the west of the church in a medieval Armenian monastery. The narthex is positioned as a shrineand assembly room.
²Consile, is the congregation of clergy toresolve religious or administrative disputes in Christianity. The term is derived from the Latin version of concilium of the Greek word sinodos meaning“meeting”, “council”.
info@akdamarkilisesi.gov.tr

In the Middle Ages, the Van Region and all of Eastern Anatolia were mostly under the control of powerful families that had an influence on the feudal Armenian lineages. Artzurini family was dominant in the Van region.

Aghtamar Church is remarkable fo its exceptionally rich stone reliefs that get their stories from the Bible and the Torah. In this respect, it has a special place in the East-West Christian art.

SECTIONS OF THE CHURCH

Architectural sections of Aghtamar Church from the past to the present

The most prominent ornaments in the history of Armenian Architecture.

The most extensive mural paintings of its era

Thank you! Your submission has been received!
Oops! Something went wrong while submitting the form.