The surface surveys and excavations in the region revealed that the history of Van Province dates back to the Chalcolithic Age and some of the settlements in the surrounding area go back to the Mesolithic Age. Cultural findings from the excavations in Ernis and Tilkitepe cemetery, which are 6 km to the south of Van Castle, confirm these results.

The Hurrians reigned in Lake Van and its vicinity between the 3rd and 2nd millennia B.C.  As a result of the destruction of the Hurri-Mittani kingdom in the near east, including theVan region, towards the end of the 2nd millennium B.C., feudal principalities emerged in and around Van. The Nairi and Urartian principalitiesin the region united against the Assyrian repression in the 9th centuryB.C. and founded an Urartu state centred around Van (Tuspa). The 9th century B.C. was the period when the Urartian state developed both politically and culturally. The first inscriptions written in Urartian language emerged in this period, during the reign of Ispini, son of King Sarduri. The growth of the Urartian state began reached its widest territory with King Menua. Water ways, canals, dams, castles and temples are built throughout this period. TheUrartians, who dominated the region as a prominent force for 300 years and left behind their significant cultural remains to the present day, were removed from the stage of history by the Medes and the Scythians at the end of the 7th century B.C. 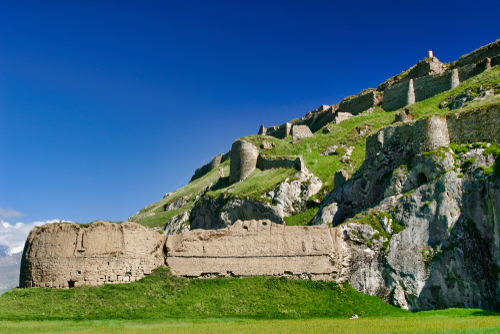 After the collapse of the Urartu state, Van and its surroundings came under the rule of the Medes and the Persians. After the rule of Alexander, the Great in 331 B.C.,the region was dominated by Seleucids, Rome, Part, Byzantium and Sassanids, respectively. After the collapse of the Part State in Iran, its heritage was claimed by the Sassanid Kingdom. Then, the region became a subject of conflicts between the Romans and the Sassanids. Van remained mostly under the reign of the Sassanids until the split of the Roman Empire in 395.
‍
Islami carmies conquered the region in 640 for the first time, during the reign of Umar, under the command of Iyaz ibn Ganem. Later, Van and its vicinity, which was reconquered during the Abbasid era, was ruled by Armenian Princes as a province under the name Armenia. The Armenian princes, who were completely independent in their internal affairs, remained under the rule of the Abbasids in their foreign affairs. Around the end of the 10th century, the ByzantineEmpire recaptured Van and dominated the Armenians under their rule. As a result of Seljuk raids beginning in 1018, Armenians left the region to the By zantine rule in 1025 and settled in Sivas region.

The Byzantine domination in the region was shaken due to the Turkish raids that began in the 11th century and the Armenian and Muslim community asked for help from the Seljuk Khan Tughril Beg and his successor Sultan Alp Arslan. In 1064, Van and many castles and towns around it was conquered by Malik-Shah.After the battle of Manzikert on August 26, 1071, the rule of the region passed to the Seljuks and Sokmens (Ahlat Sheiks). The region was under the rule of Ayyubids in 1207 and the Anatolian Seljuks after 1229.

After the Mongols adopted Islam, during the period of the Ilkhanian State that they founded, the Eastern Anatolia Region was divided into two provinces under the rule of this state: one is Musul whose capital was Diyarbakır, the other wasVan with its capital Ahlat. Ercis, Aladag, Bargiri (Muradiye), Hosap,Malazgirt, Ahlat, Bitlis, Van, Adilcevaz, Vastan (Gevas), were connected to theprovince of Ahlat. After the mid 16th century, with the weakening of the Ilkhanians, an independent state was established by the Karakoyunlu Turkmens, the centre of which was Ercis. Melik İzzeddin Şir, who was affiliated to Van, Vastan and Karakoyunlu of Hakkâri, declared his loyalty to Timur after Timur conquered Van, and regained the control of the Van area. After Timur with drew from Anatolia, the region came under the reign of the Karakoyunlu once again. During this period, it was given under the administration of Hakkari Izzeddin Şir Bey, and the Mahmudi Principality was founded in Hoshap. Uzun Hasan, the ruler of Akkoyulu, killed the Karakoyunlu ruler Cihan Shah with an unexpected raid in 1467 and took control of the region. After the Akkoyunlu-Safavid war in 1503, the Van Lake Basin went under rule of theSafavid. The Ottoman rule in the region which frequently changed hands between the Ottoman and Safavid states, was established during the reign of Suleiman the Magnificent. The region frequently changed hands since it constituted a border between the Ottoman and Iran, and both states had to make compromises to the local princes, in order to keep the region under their control. After theOttoman sovereignty was established, the local princes assumed the administration of their regions under the rule of the Ottoman Empire.

The Lake Van Basin, which went under the rule of the Ottoman after the 2nd IranExcursion in 1548, was included within the newly established province of Van, and Sarı Iskender Pasha was appointed as its governor. Although there has been changes in the administrative structure of the region time to time after 1548, the Lake Van Basin continuously remained under Ottoman rule. In World War I, the Russians invaded Van on May 20, 1915. After 2 years, 10 months and 13 days of occupation, the Turkish army rescued Van from enemy occupation on 2 April1918. In the same period, massacres were committed by the Armenians in the region and settlements were destroyed. Since the Russian and Armenian occupations ended in 1918, the region has been under the government of theTurkish Republic.